Support the city’s bike share decision with a bike charity workshop for kids.

In a city known for its vast network of highways and car-bound culture, it’s nice to see some forward movement on team building ideas, like getting more people to ride bicycles.  The city of Los Angeles just announced, on June 25, 2015, that we’ll finally be getting our first new bike share program.  There will be almost 1,100 bikes across downtown LA by spring of 2016, posted at stations where anyone can pick one up using an app to find them. 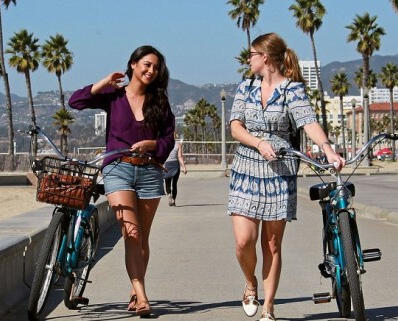 Of course here at Magnovo we think that’s just great: we’ve supported bike riding for years with our Bicycle Team Building Workshop, which brings bikes to deserving kids in local communities.  It’s always been the most popular of our team building ideas, and now that LA is moving into the 21st century on the matter of bikes, it’s going to be an even bigger hit with companies in the metro area.  Companies looking to expand on their mission of corporate social responsibility can choose any of Magnovo’s charity team building workshops, but right now in LA bicycles seem especially relevant!

Three Things That Go Great Together: Bicycles, Teamwork and you!

Now that LA is joining the rest of the nation and moving forward on becoming  a bicycle-friendly city, it’s a great time to opt for a bicycle-building corporate team building workshop.  As team building ideas go, building something together strengthens team bonds and allows great opportunities for improving important work place skills.

By choosing Magnovo’s Bicycle Team Building Workshop, you’re not only helping your team gain valuable skills they’ll need to excel at work, but you’re also forming bonds with Los Angeles neighborhood kids.  The bicycles your team builds will be donated to kids who need them, via a charitable organization.  Past clients have gone through organizations such as The Boys & Girls Clubs of America.

The city’s new bike share initiative is something everyone can get behind, which is one more reason why the bike building workshop makes perfect sense right now.  Any group looking to improve teamwork, work on communication skills, or even other skills (you name it, we’ll work it into your workshop) can do all these things and more in just two and half hours with Magnovo’s help.  The bicycle building event has been the most popular team building ideas of all time…why not book one for your group and celebrate LA’s new bike share program while you’re at it!