MGT Consulting had already seen the positive results of our Bike-A-Thon™ program. And we were thrilled to return and do another program for them. We met a group of 30 participants at the rooftop space in the Godfrey Hotel in Chicago, IL. 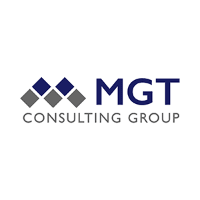 MGT Consulting employees came to this team building event from across the country. It was a wide mix of ages, and a group that doesn’t get to meet in person very often, so this was a unique opportunity. We wanted to help this team find a genuine cohesiveness. They needed to be able to work together, as diverse as they were in age and geography, toward a shared goal. By practicing here, they could master skills to take back to work with them.

Games and Growing Together in Chicago, IL

Everyone enjoyed a few ice breakers to begin with. They helped folks loosen up a bit and become more comfortable with each other. Do What I Say always gets a lot of laughs, and people enjoyed Flip the Cup, Air Writing, and Blind Ball Drop. After that, we split the group into teams for the Bike-A-Thon™.

Teams complete games and challenges to earn bicycle parts and the tools used for assembly. The goal of the Bike-A-Thon™ is, of course, to put together bicycles for donation to area children. But through fun activities, participants also learn to recognize and capitalize on each other’s differences. It’s a great way for people to practice working together in a tangible way. They develop skills and relationships that will serve them well once they return to their offices.

After two hours, the MGT Consulting teams had each put together several bicycles. A group that had started off the program being rather shy with each other had truly melded into a team. They cheered each other on and worked hard for the kids served by the SOS Children’s Villages Illinois. Anne Glaza arrived to accept the donation of bicycles, and she was pleasantly surprised by how many bikes she was taking back with her.

Ms. Glaza shared with us several success stories from SOS Children’s Villages and the families they serve. The organization assists siblings in the foster care system. SOS Children’s Villages provide a stable home supervised by a professional, full-time caregiver. Every one of the participants clapped and cheered for Ms. Glaza and the work her organization does. It was clear that while the MGT Consulting participants started off the day as individuals who just happened to work for the same company, they were certainly going home as a team.