Usually around here we’re buzzing about team work, corporate team building, leading a team, developing teams…anything team-related. But a recent networking event lead by a Magnovo facilitator reminded us that teams come in many different forms.

In this case, it was the original sense of the word: a football team!  We were honored to work with corporate sponsors of the Philadelphia Eagles in what turned out to be a fantastic networking event.  Representatives from dozens of companies who sponsor the Eagles were present, and we helped them break the ice, then work together to create fun and beautiful wagons to donate to the Ronald McDonald House. 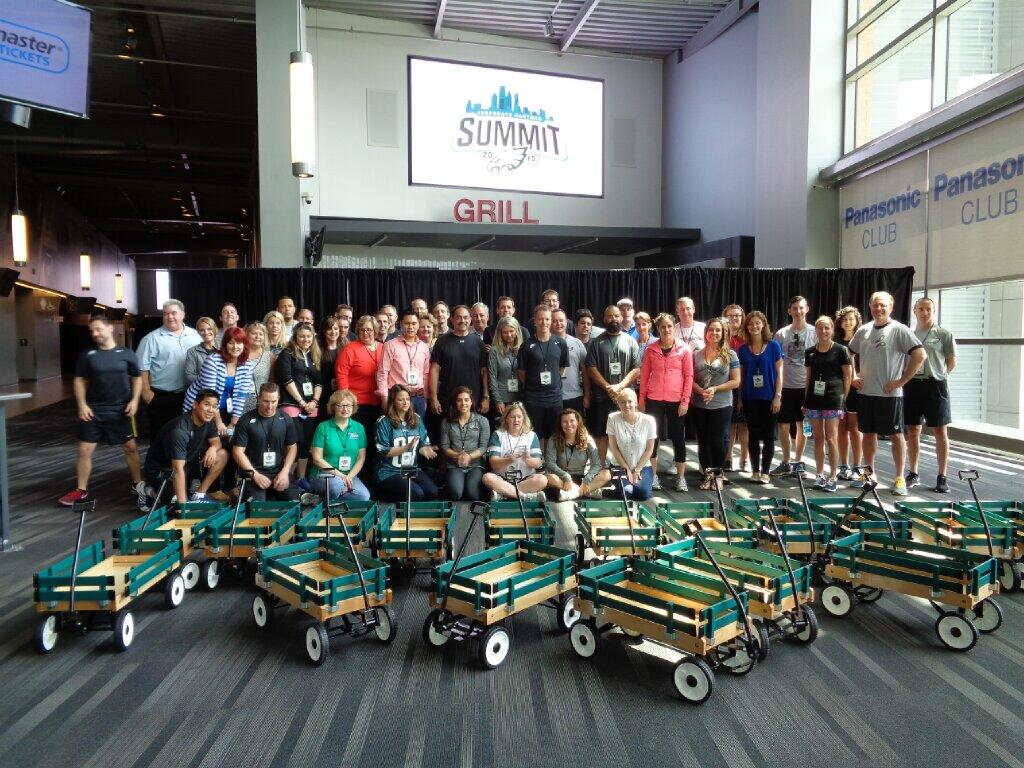 The Magnovo workshop facilitators got things going quickly, knowing there was limited time and lots to accomplish.  The large group was divided into 9 teams, then given an ice-breaking activity to complete.  This involved our famous “invisible chalkboard”…loads of fun but we’ll save the details for a future workshop.  No spoilers here!

Of course we don’t just give teams the tools and parts they need to build their wagons – the 9 teams worked through a total of three activities to earn the necessary components. Each activity was designed to facilitate networking, the stated goal of the event. Fun challenges and easy collaborative exercises made for a friendly  atmosphere and soon things were rolling along quickly. Reps from corporations like Frito-Lay, Snapple, American Airlines, Comcast and a lot more were getting busy and assembling wagons like pros!

Each team finished its wagon on time…with time to spare!  That meant there was time for some extra challenge.  Building on the camaraderie teams had developed while building the lovely green wagons together, facilitators now challenged them to create commercials to “sell” their wagons.

Now that teams had already worked together building wagons, they were really able to let go their fears and lower their barriers.  That meant the creative juices were really flowing and the resulting commercials were incredible.  These participants could really start second careers as advertising moguls if they wanted to!

Videos were taken, pictures were snapped, and to top it all off we even did a group picture to commemorate the event.

Bonus Perk: Hearing From the Coach

Our Magnovo workshop facilitators are like coaches- they lead a group and inspire them to do better and work together for group success.  So it was a great thrill for everyone at the end of the workshop that the Philadelphia Eagles coach Chip Kelly was on hand to speak with the participants (sponsors) and answer their questions.  We were invited to stay too, to our immense delight.  It was great to be inspired by such a great group of participants and by a fascinating man like Coach Kelly.