New vs. Old Norms in the Workplace

New versus old norms in the workplace. The battle is heated and you can almost hear the rumbling and grumbling about home-based versus on-site work spaces.

There’s good news and there’s bad news—which one applies to you depends on where you are on the food chain.

The Huffpost.com reports that  “According to Microsoft’s newly released Work Trend Index survey, 61% of business leaders say they’re “thriving” right now, while only 38% of workers without decision-making authority say the same………Business leaders in the survey were more likely to be male and farther along in their careers. Compared to workers without decision-making authority, they reported stronger relationships with colleagues and leadership, higher incomes, and a higher likelihood of taking all of their allotted vacation days.”

They’re encouraged by the  success of the current vaccination drive and the trend toward loser social restrictions. Plus millions of students around the country have returned to school. So many CEOs  see these as signs that things are returning to normal. In fact, they’re feeling so optimistic that many are ready for their staffers to return to the office.

Meanwhile their underlings are still overwhelmed by all of the daily challenges COVID caused. And a lot of staffers are balking because their bosses refuse to adjust to the “new normal.”

Ready or not: new versus old norms in the workplace

The fact is that while millions of people have been vaccinated, there are millions who are still waiting, and many who refuse to do so! And since the shots are not mandatory, what can you do? Then there’s the threat of COVID virus variants about which we’re still learning. So the fear of infection is very real. 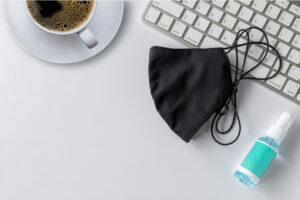 According to Newsweek, “Nearly two-thirds of Americans still have not received even one dose and only 20 percent of the population has been fully vaccinated. And with variants spreading, COVID-19 cases are on the rise again in most states across the country.”

Additionally, thousands of kids continue learning remotely, which puts their parents in a bind. They can’t return to the office without someone to supervise their children. This is particularly problematic for single parents and lower income families.

Be they ever so jumbled, there’s no place like home offices. As chaotic as it was adjusting to remote work assignments, a lot of employees aren’t ready to face the daily commute and the 9 to 5 grind.

Granted, remote work hasn’t exactly been paradise. Zoom fatigue. Longer hours. Isolation. Feeling  undervalued. Fear of not being promoted. These issues have loomed large in the minds of remote workers. Nevertheless, child care, and flexible schedules outweigh these concerns for a lot of them.

New versus old norms in the workplace and team building

Effective leadership during this pandemic means  being in touch with what’s impacting workers. The well-being of the company and the well being of the employees should not be at odds with each other.  They are interdependent, or they should be, if team building goals are going to be met. 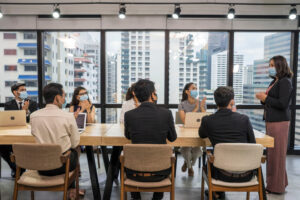 At the beginning of this nightmare, everybody felt they were in the same boat. The drawbridge was lowered and siloed information was released as needed. Leaders risked transparency with their teams and share decision-making challenges with them—and the positive feedback was phenomenal. Employers who expect workers to be dedicated to the company must be dedicated to the welfare of those workers. That’s one lesson  from the COVID school of hard-knocks that can’t be scrapped at this juncture.

Agility in the executive suite is now equally as important as it is among subordinates. Hybrid schedules that include both on-site and remote work assignments may be necessary for the long term. Assuring employee safety on-site and at home-based offices should be a top priority. And whatever happens, everyone from the top down will need a learning curve and allowances for hiccups should be made.

Employee well-being must be included in plans to boost or revive the company’s bottom line. Mediation and compromise have never been more crucial in Corporate America. With strong but humane leadership everyone can thrive.