Leadership Responsibilities and the Roles of Good Leaders

Having fought in World War II with the lives of hundreds of thousands of men and the fate of many countries in his hands, Mr. Eisenhower definitely knows leadership responsibilities first hand.

A Good Leader Cares for the Individual 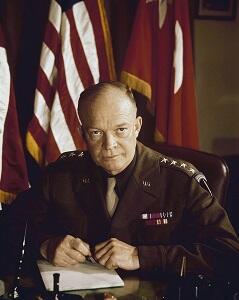 Historians describe how Mr. Eisenhower, as commander of the famous Operation Overlord in World War II, would often sneak out of his office and through the rows of officers to go to the front lines and talk with soldiers. It is said he had a keen listening ability and was happiest sharing stories with his troops.

He asked about their hopes and shared his own. He developed such a strong connection with each individual soldier that when he called them to action, they did so not merely out of duty but more so in response to a personal friend whom they believed could rally them to victory.

Mr. Eisenhower’s genuine attention to his individual followers is characteristic of good leadership and essential in leadership development. A good leader does not see nor treat his followers as a mass; rather, he sees their individual and collective potential to bring the team to success.

One of the primary objectives of anyone in a position of leadership must be motivating the team to action. Pres. Eisenhower was faced with very difficult situations. He was under pressure to deliver victory but also burdened with the knowledge he would invariably have to break the news to families of his men who died in the battles. He was tired and he had doubts, but, when talking to his troops, he was always vibrant and positive of victory. He knew his men would emulate his demeanor, and any sign of uncertainty in him would make them uncertain, too.

Motivating requires effective communication. You must be able to convey a message clearly and persuasively in order to convince your team to support your ideas. Good leaders are engaging speakers but not everyone is born with the skill. It takes training and a lot of practice to diminish the fear of speaking to an audience. We like to include public speaking exercises as part of our leadership training workshops to equip future leaders with the skills required to communicate effectively with others.

A Good Leader is a Good Manager

A good leader manages the team well and is expected to run operations smoothly. At one point during the war, Mr. Eisenhower had to oversee the deployment of volunteers. He had to take charge of logistics for housing, training, and arranging assignments.

Because there were many variables involved, the President had to be very flexible and creative to meet the demands for troops on the field while maintaining the quality of their training.

Becoming a good manager requires willingness and the hunger to learn. Do not pass on opportunities to handle a variety of assignments that will expose you to the many facets of the company. You must keep an ear open for the different challenges that confound various components of the organization and understand the solutions that resolved them.

These are valuable lessons in leadership development.

If you are looking to fast-track your leadership development training, contact us and see how we can help! We also publish our helpful “Tips Tuesdays” video series on leadership and presentation skills on YouTube, with weekly updates.